At the end of the 1980s the infamous ‘cardboard city’ in the Bullring beside Waterloo station was home to 200 people living in cardboard boxes and charities estimated that more than 3,000 people were sleeping rough in London.

Two volunteers Walter and JP, motivated by their Christian faith, felt called to do something to identify with the homeless in London. By living on the streets for 5 days and nights and speaking to a lot of homeless people, they gained an understanding how to help. In time, a small committed team was mobilised to provide food, clothing and human connection to those on the streets. 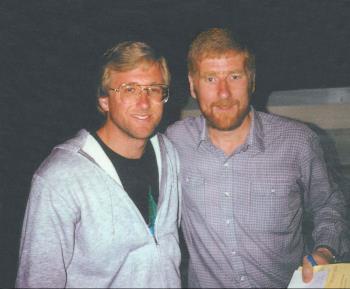 Two Step was born out of this desire to do something practical and began in a living room:

Step 1 was was emergency accommodation through the Stop Over scheme – a network of volunteers available to house the homeless in their homes on a temporary basis.

In 1995 ‘Two Step’ became part of the international network of charities ‘HOPE worldwide’ and has gone from strength to strength - helping over 6,000 people to access accommodation in the first 25 years. The housing process works differently now and the above steps no longer apply but the Two Step name remains!